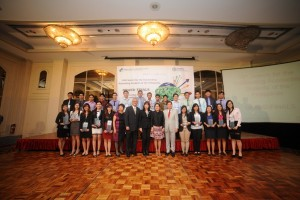 For the second time around, P&A Foundation, in cooperation with the Association of Certified Public Accountants in Commerce and Industry (ACPACI) and the Philippine Institute of Certified Public Accountants (PICPA), organized the 16th Search for the Outstanding Accounting Students of the Philippines (SOASP). The SOASP is an annual nationwide competition which seeks to determine the top Accountancy students in the country and open doors of career opportunities for students.

There were a total of 297 students from 56 universities and colleges from NCR, CAR, Region I, II, III, IVA, IVB, V,VI, VII, X, XI, and XII who participated in the Qualifying exam which was held simultaneously on October 18, 2014 at 12 testing centers nationwide. The examination covered nine subjects: Business Law, Current Issues/Economics, Finance, Financial Accounting, Information Technology, Management, Managerial Accounting, Marketing, and Taxation. After the qualifying exam, the top 25 students with the highest score for all 9 subjects were determined as the Top 25 Finalists who moved forward to the Grand Finals competing in a Quiz Bowl. The Grand Finals was held on December 12, 2014 at the Grand Ballroom, Century Park Hotel Manila.