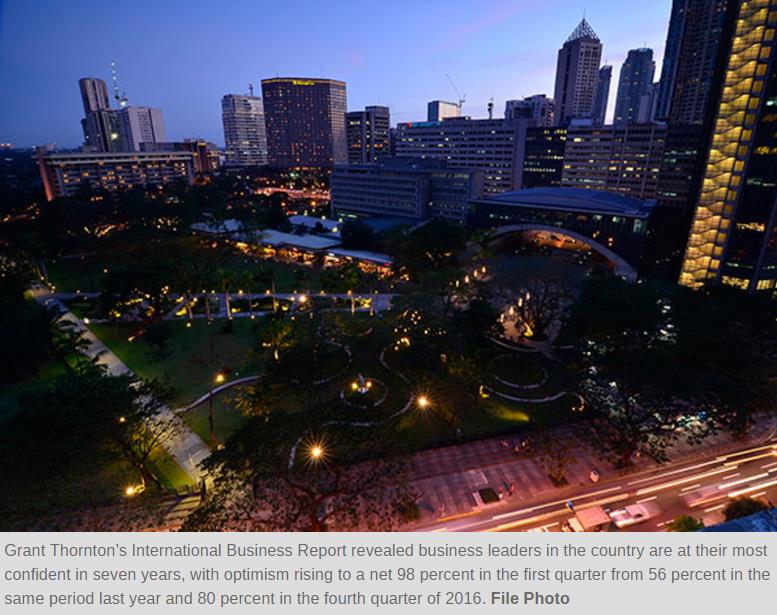 MANILA, Philippines - Business optimism in the Philippines soared to a new high seven-year in the first quarter, ranking as the second strongest among 36 economies worldwide, a new global survey showed.

Grant Thornton’s International Business Report revealed business leaders in the country are at their most confident in seven years, with optimism rising to a net 98 percent in the first quarter from 56 percent in the same period last year and 80 percent in the fourth quarter of 2016.

Based on data available since the fourth quarter of 2010, the highest business optimism which the country recorded prior to the latest results was in the third quarter of 2013, with a net rate of 96 percent.

The 98 percent optimism rate of business executives on the country’s economy over the next 12 months placed it second behind Indonesia’s 100 percent.

Malta placed third with 86 percent, followed by India and Netherlands at 85 percent and 84 percent, respectively.

Japan and Greece were at the bottom with -25 percent and -52 percent, respectively.

“We’ve witnessed a split between the developed and emerging Asia-Pacific regions for some time now, so it’s encouraging to see the region’s developed economies experience a positive swing in the pendulum. With confirmation of a US withdrawal from the Trans-Pacific Partnership, at least businesses can now begin to manage the fall-out. Many will be looking to see how trade relations with the US pan out in the future and, in the meantime, the corridor to China for exports looks positive as its economy continues to recover,” P&A Grant Thornton chairperson and CEO Marivic Espano said.

For the Philippines, expectation for higher revenues in the next 12 months increased to 76 percent in the first quarter from 66 percent in the same quarter last year. Profitability expectations are also higher at 84 percent from 70 percent the previous year.

Meanwhile, businesses who have cited regulations and red tape as major constraint have declined to 28 percent in the first quarter from 52 percent in the same period last year.

As published in Philippine Star, dated on 12 April 2017