Every year, Lent — which begins on Ash Wednesday and ends on Black Saturday — is observed by Christians all over the country. For many devout Christians, the season of Lent is a time for repentance, prayer, and self-reflection to strengthen one’s relationship with God.

April 15, Holy Monday, was also the last day of filing the Annual Income Tax Return (ITR). It was also a good opportunity for us taxpayers to spend the time reflecting on this year’s ITR filing.

TAXING AUTHORITY
The Bureau of Internal Revenue (BIR) consistently rolls out a national campaign to remind taxpayers to file and pay their taxes on time and to avoid the rush of filing on the last day. The BIR’s regional offices typically set up tax filing assistance centers to help taxpayers with ITR-related concerns.

One of the significant changes this year is how the BIR implemented the simplification of preparing and filing the tax returns, anchored on the passage of the Tax Reform for Acceleration and Inclusion (TRAIN) Law. ITR forms were reduced from 13 to four pages. Taxpayers very well know the difficulty of preparing the ITR. Hence, lessening the required information and number of pages is a big help. Taxpayers would further appreciate if the improved tax return features automatic computation, minimizing manual errors in calculating and extending the amounts on the forms.

The BIR recently issued several Revenue Memorandum Circulars (RMCs) to prescribe the use of the revised January 2018 BIR Forms, as follows: 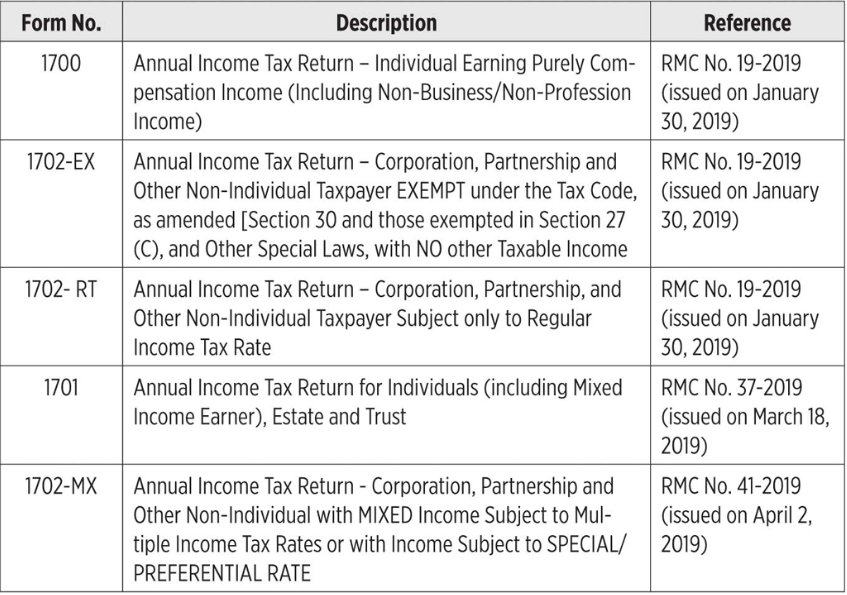 Unfortunately, the forms above are mostly not yet available at the time of filing through the Electronic Filing and Payment System (eFPS) and Electronic Bureau of Internal Revenue Forms (eBIR Forms). In effect, taxpayers are still redirected to the old forms. Taxpayers did not enjoy the benefit of tax return simplification. Given this predicament, we hope that electronic tax returns are soon available on the BIR platforms for taxpayers who will be filing for their fiscal years.

The other challenge is the use of the eFPS. Taxpayers expect to use this facility conveniently and seamlessly. However, access to the eFPS is intermittent. The slow connection adds stress and pressure to taxpayers who are already having a difficult time accessing the BIR portal when filing and paying online. It is a burden for taxpayers to always keep an eye on when the system is finally up.

We acknowledge that the BIR advises the public on the unavailability of the eFPS and its proposed work-around procedures, i.e., using offline eBIR forms and proceeding with manual filing and payment at the bank. However, preparing the check for some taxpayers is not easily done, as it would require a number of signatures before the check can be released.

The intermittent connection to the eFPS during filing season is always a recurring concern. We hope that the BIR can address the system issues so taxpayers are encouraged to shift from manual filing to eFPS.

AUTHORIZED AGENT BANKS
We should not discount the participation of the Authorized Agent Banks (AABs) in tax filing. AABs receive tax payments on behalf of the BIR both for manual and eFPS filers. I cannot imagine the number of people that would congest the AAB and BIR premises if all taxpayers are filing and paying their tax returns manually.

An additional challenge facing taxpayers was when one of the country’s largest banks performed its major system upgrade that lasted days during the height of filing season. This resulted in is an additional burden, as taxpayers were redirected to pay manually with the AABs within the jurisdiction of the RDO or the National Office. System upgrades should be completed on a timely basis, either a month before or after the filing season date, rather than during the tax filing season, if possible.

TAXPAYERS
The man of the hour is the taxpayer who manages to beat the deadline for filing and paying, despite the challenges.

In 2019, taxpayers were faced with challenges in preparing their ITR as the result of the adoption of new accounting standards. How would Philippine Financial Reporting Standards 15 (Revenue from contracts with customers), PRFS 9 (Financial Instruments), and PFRS 16 (Leases) affect the calculation of tax due?

On the other hand, there are taxpayers who like to stretch their preparation and filing to the last day. This habitual practice, however, has its risks. Taxpayers who rush may possibly overlook important details that may lead to errors if there is no allocated time to review.

We hope that taxpayers consider planning their ITR preparation and filing and acting on those plans accordingly. Taxpayers should always keep in mind that the annual ITR is one of the source documents used by the BIR in conducting audits. Hence, it is important that taxpayers have considered preparing and reviewing the reconciliation of the income and expenses reported in the financial statements and other tax returns.

As published in BusinessWorld, dated 23 April 2019