Unlocking the potential for growth in local communities 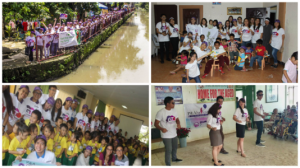 Labeled “GT in the community,” Grant Thornton’s global CSR day witnessed thousands of its people, from more than 70 member firms across the globe, step out to initiate change in their local communities.  In participation to the global activity, P&A Grant Thornton and P&A for a Cause (P&Ause) conducted four simultaneous CSR activities in Manila, Cavite, Cebu, and Davao.

On the other hand, volunteers from P&A Grant Thornton Cavite organized “P&Agkalinga,” a charity event for the children of Little Angels Home Inc. (LAHI) Foundation in Tagaytay City.  The volunteers prepared activities and gave toys to the children of LAHI Foundation.  The team also donated basic necessities to the organization.  LAHI Foundation is a charitable institution providing 24-hour resident group care service for the mentally gifted, dependent abandoned, neglected, handicapped or disturbed children, including, the abused and exploited.

Our volunteers from P&A Grant Thornton Davao also took part in the global activity, as they organized “P&Ahalipay,” a thanksgiving event for the elders at Care for the Elderly Foundation, Inc. Home for the Aged in Tugbok District, Davao City.  The volunteers handed out roses to express their love and compassion for the elders.  The team also brought entertainment to the elders and provided the foundation with basic necessities, including toiletries and medicines.