What's next for best-performing PH economy under Duterte admin? 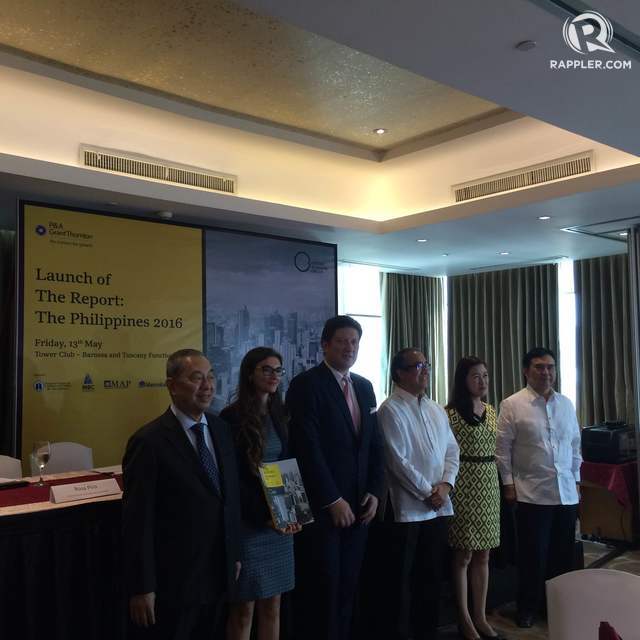 FACILITATING INVESTMENT. Oxford Business Group officials and their partners pose at the launch of The Report: The Philippines 2016 on May 13.The report is meant to serve as a comprehensive guide to investors interested in setting up in the country. (from left) Guillermo Luchangco – Chairman/CEO, ICCP Group, Rosa Piro - OBG Country Director Philippines, Paulius Kuncinas, Francisco Sebastian, Atty. Lea Roque Head of Tax Advisory Punongbayan & Araullo, and Crisanto Frianeza – Security General, Philippine Chamber of Commerce and Industry.

MANILA, Philippines – In its year report last year, global research and consultancy firm the Oxford Business Group (OBG) highlighted aspects of the Philippines' exciting growth story. This year, the group believes that story could get even more exciting despite a change in leadership.

“Today, the Philippines is the best economy in Southeast Asia and I don’t think I would have been able to say that when I first came to Manila 7 years ago,” said Paulius Kuncinas, OBG’s Managing Director for Asia, at the launch of its 2016 Report for the Philippines on May 13.

Kuncinas said that the Philippine economy has "emerged as a star performer for several years running and has established itself as a leader in a number of sectors, notably in BPOs" and is "one of the few economies in the region that doesn’t depend on oil and natural resources."

“That’s the recipe for success in the 21st century. You want to build an economy that’s diverse, sustainable which doesn’t use natural resources and the fundamental pillars are in place. Now the big question is what’s next?“ he said.

There are critical milestones on the path to growing into an advanced economy. OBG said that attracting more foreign direct investments (FDI) and fixing infrastructure bottlenecks are crucial to getting there.

Government should step in on infrastructure

Kuncinas said said that instead of placing the burden on the the private sector, the governemnt should be directly involved In infrastructure development, especially involving major projects, to speed up the process.

“The sovereign has to step up. We don’t know of any example anywhere in the world, be it the US, UK, Singapore where infrastructure projects are financed by the private sector. You need the sovereign guarantee, at least part of it,” he said.

"For that to happen, you have to improve government finances especially the tax base and fiscal performance," he explained, adding that the Philippines has recently started enjoying a fiscal surplus.

Kuncinas suggested that the government take over key projects, airports, seaports, and highways to build investor confidence and attract FDIs as these generate a multiplier effect for investments.

“There’s a reason Dubai built the biggest airport in the world, because it gets the money back through traffic and creates flows,” he said, pointing out that the government should look at it as an investment rather than as expenditure.

OBG partner and Metrobank vice chairman Francisco Sebastian pointed out that the government already has the money to be invest in these mega projects.

"We are credit-worthy and and our credit is investment grade so building infrastructure projects doesn’t just have to be through PPPs we can spend on our own," he added.

Francisco clarified it that doesn’t mean that the PPP program should be scrapped but should be complemented by direct government spending.

Confidence in the next administration

In its economic outlook for the country for this year, OBG noted that despite the election, the country’s overall economic direction is unlikely to change. It cited the strength of the BPO sector continuing to lead growth across the economy.

The report also noted that constitutional reforms to allow more foreign ownership and a drive to join the Trans-Pacific Partnership could be the game-changers that could finally turn the country into a top tier foreign investment destination. (READ: Duterte open to lifting cap on foreign ownership of firms)

OBG partners shared that they thought Duterte would broadly go for continuity and would tweak, rather than overhaul, the Aquino administration’s policies.

They pointed out that the fact that Duterte has moved quickly to outline his economic plans and formulate his economic team bode well for the business community.

Addressing infrastructure figured prominently in the 8-point economic agenda Duterte’s camp released earlier this week. It promised to spend at least 5% of the GDP on addressing bottlenecks, as well as reforming tax reforms and maintaining the current macroeconomic policy.

Since it became clear that he would be the next president, Duterte has also signaled that he is open to easing constitutional restrictions on foreign ownership.

“The stock market is up, the MSCI has upgraded us, and the peso and government bonds have been strengthening, so it's been a rousing welcome for the new government. So hopefully, this can be a good platform for better growth down the line,” Francisco said.

As published in Rappler dated 13 May 2016 by Chris Schnabel