Benjamin ‘Ben’ Punongbayan, the founder of P&A Grant Thornton, is a recipient of this year’s “Parangal San Mateo Award” by the Philippine Institute of Certified Public Accountants (PICPA). The awarding ceremony will be held at the EDSA Shangri-La Hotel. 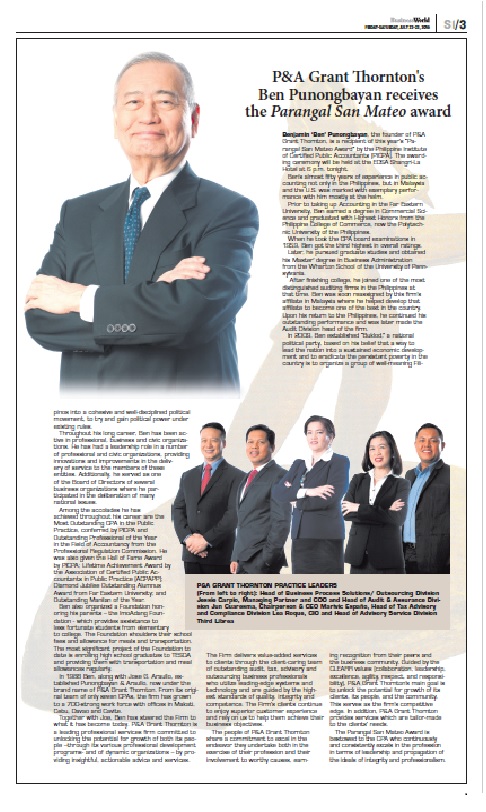 Ben’s almost fifty years of experience in public accounting not only in the Philippines, but in Malaysia and the U.S. was marked with exemplary performance with him mostly at the helm.

Prior to taking up Accounting in the Far Eastern University, Ben earned a degree in Commercial Science and graduated with Highest Honors from the Philippine College of Commerce, now the Polytechnic University of the Philippines.

When he took the CPA board examinations in 1959, Ben got the third highest in overall ratings.

Later, he pursued graduate studies and obtained his Master’ degree in Business Administration from the Wharton School of the University of Pennsylvania.

After finishing college, he joined one of the most distinguished auditing firms in the Philippines at that time. Ben was soon reassigned by this firm’s affiliate in Malaysia where he helped develop that affiliate to become one of the best in the country. Upon his return to the Philippines, he continued his outstanding performance and was later made the Audit Division head of the firm.

In 2009, Ben established “Buklod,” a national political party, based on his belief that a way to lead the nation into a sustained economic development and to eradicate the persistent poverty in the country is to organize a group of well-meaning Filipinos into a cohesive and well-disciplined political movement, to try and gain political power under existing rules.

Among the accolades he has achieved throughout his career are the Most Outstanding CPA in the Public Practice, conferred by PICPA and Outstanding Professional of the Year in the Field of Accountancy from the Professional Regulation Commission. He was also given the Hall of Fame Award by PICPA; Lifetime Achievement Award by the Association of Certified Public Accountants in Public Practice (ACPAPP); Diamond Jubilee Outstanding Alumnus Award from Far Eastern University; and Outstanding Manilan of the Year.

Ben also organized a Foundation honoring his parents – the ImoAdang Foundation - which provides assistance to less fortunate students from elementary to college. The Foundation shoulders their school fees and allowance for meals and transportation. The most significant project of the Foundation to date is enrolling high school graduates to TESDA and providing them with transportation and meal allowances regularly.

In 1988 Ben, along with Jose G. Araullo, established Punongbayan & Araullo, now under the brand name of P&A Grant Thornton. From its original team of only seven CPAs, the firm has grown to a 700-strong work force with offices in Makati, Cebu, Davao and Cavite.

Together with Joe, Ben has steered the Firm to what it has become today. P&A Grant Thornton is a leading professional services firm committed to unlocking the potential for growth of both its people –through its various professional development programs- and of dynamic organizations – by providing insightful, actionable advice and services. The Firm delivers value-added services to clients through the client-caring team of outstanding audit, tax, advisory and outsourcing business professionals who utilize leading-edge systems and technology and are guided by the highest standards of quality, integrity and competence. The Firm’s clients continue to enjoy superior customer experience and rely on us to help them achieve their business objectives.

The people of P&A Grant Thornton share a commitment to excel in the endeavor they undertake both in the exercise of their profession and their involvement to worthy causes, earning recognition from their peers and the business community. Guided by the CLEARR values (collaboration, leadership, excellence, agility, respect, and responsibility), P&A Grant Thornton’s main goal is to unlock the potential for growth of its clients, its people, and the community. This serves as the firm’s competitive edge. In addition, P&A Grant Thornton provides services which are tailor-made to the clients’ needs.

The Parangal San Mateo Award is bestowed to the CPA who continuously and consistently excels in the profession in terms of leadership and propagation of the ideals of integrity and professionalism.