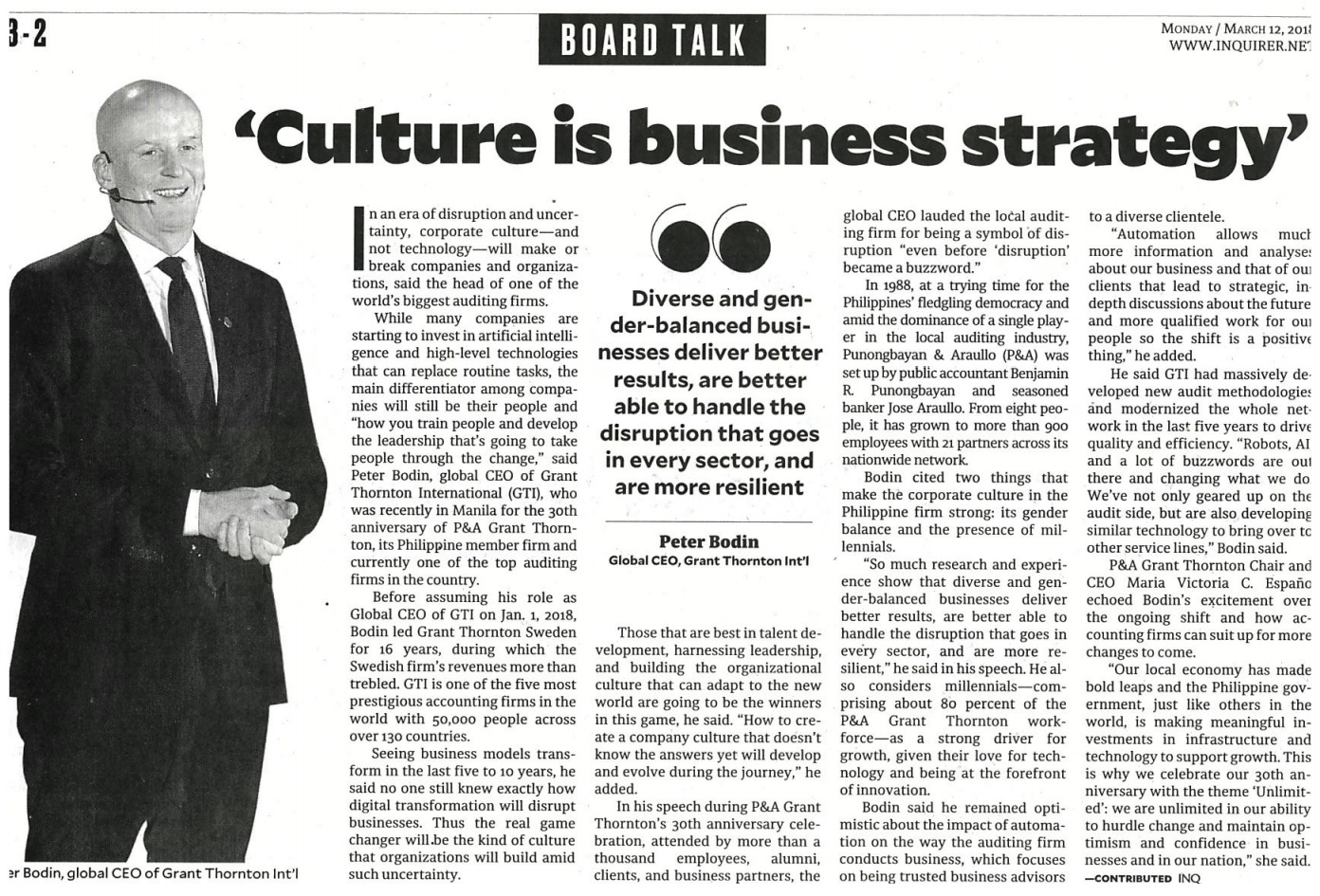 In an era of disruption and uncertainty, corporate culture—and not technology—will make or break companies and organizations, said the head of one of the world’s biggest auditing firms.

While many companies are starting to invest in artificial intelligence and high-level technologies that can replace routine tasks, the main differentiator among companies will still be their people and "how you train people and develop the leadership that's going to take people through the change," said Peter Bodin, global CEO of Grant Thornton International (GTI), who was recently in Manila for the 30th anniversary of P&A Grant Thornton, its Philippine member firm and currently one of the top auditing firms in the country.

Before assuming his role as Global CEO of GTI on Jan. 1, 2018, Bodin led Grant Thornton Sweden for 16 years, during which the Swedish firm’s revenues more than trebled. GTI is one of the five most prestigious accounting firms in the world with 50,000 people across over 130 countries.

Seeing business models transform in the last five to 10 years, he said no one still knew exactly how digital transformation will disrupt businesses. Thus the real game changer will be the kind of culture that organizations will build amid such uncertainty.

Those that are best in talent development, harnessing leadership, and building the organizational culture that can adapt to the new world are going to be the winners in this game, he said. “How to create a company culture that doesn’t know the answers yet will develop and evolve during the journey,” he added.

In his speech during P&A Grant Thornton’s 30th anniversary celebration, attended by more than a thousand employees, alumni, clients, and business partners, the global CEO lauded the local auditing firm for being a symbol of disruption “even before ‘disruption’ became a buzzword.”

In 1988, at a trying time for the Philippines’ fledgling democracy and amid the dominance of a single player in the local auditing industry, Punongbayan & Araullo (P&A) was set up by public accountant Benjamin R. Punongbayan and seasoned banker Jose Araullo. From eight people, it has grown to more than 900 employees with 21 partners across its nationwide network.

Bodin cited two things that make the corporate culture in the Philippine firm strong: its gender balance and the presence of millennials.

“So much research and experience show that diverse and gender-balanced businesses deliver better results, are better able to handle the disruption that goes in every sector, and are more resilient,” he said in his speech. He also considers millennials—comprising about 80 percent of the P&A Grant Thornton workforce—as a strong driver for growth, given their love for technology and being at the forefront of innovation.

Bodin said he remained optimistic about the impact of automation on the way the auditing firm conducts business, which focuses on being trusted business advisors to a diverse clientele.

“Automation allows much more information and analyses about our business and that of our clients that lead to strategic, in-depth discussions about the future, and more qualified work for our people so the shift is a positive thing,” he added.

He said GTI had massively developed new audit methodologies and modernized the whole network in the last five years to drive quality and efficiency. “Robots, AI, and a lot of buzzwords are out there and changing what we do. We’ve not only geared up on the audit side, but are also developing similar technology to bring over to other service lines,” Bodin said.

P&A Grant Thornton Chair and CEO Maria Victoria C. Españo echoed Bodin’s excitement over the ongoing shift and how accounting firms can suit up for more changes to come.

“Our local economy has made bold leaps and the Philippine government, just like others in the world, is making meaningful investments in infrastructure and technology to support growth. This is why we celebrate our 30th anniversary with the theme ‘Unlimited’: we are unlimited in our ability to hurdle change and maintain optimism and confidence in businesses and in our nation,” she said. —CONTRIBUTED