Business optimism slips in Philippines though 2nd strongest among 36 marts

BUSINESS OPTIMISM in the Philippines fell in 2016’s final three months, continuing a decline seen in the third quarter, but it was still among the strongest in a list of 36 economies, according to results of a global survey that were e-mailed to journalists yesterday.

Grant Thornton’s International Business Report (IBR) showed overall business optimism in the Philippines sliding four points to a net 80% in the last three months of 2016 from the third quarter’s 84%.

The report -- based on interviews with 2,500 chief executive officers, managing directors, chairmen or other senior executives across industries -- showed the Philippines was bested last quarter only by India and Indonesia which both registered 88%, though down from third-quarter readings of 93% and 98%, respectively.

The survey asked top executives on their expectations for improvement in revenues, exports, employment, profitability, research and development (R&D) investment, as well as prospects for economic uncertainty. The Philippines fared as follows:

“There is a striking split... between business leaders in emerging and developed Asia-Pacific countries,” P&A Grant Thornton Chairperson and Chief Executive Officer Marivic C. Españo said in a statement.

“Part of the reason for this could be the likely scrapping of the Trans-Pacific Partnership, out of which developed economies -- like those of Australia and New Zealand -- stood to gain the most,” she added, noting that “China is looking to implement its own regional economic partnership, which could fill some of that gap.”

“The high levels of optimism in emerging economies reflect what can happen when closer economic ties are in place, with the ASEAN Economic Community agreed in 2015,” she noted.

“Globally, the increase in optimism reflects a view among the business community that uncertainty over the outcome of major events like the EU referendum [in the United Kingdom] and the US presidential election is now behind them.” - RSCC 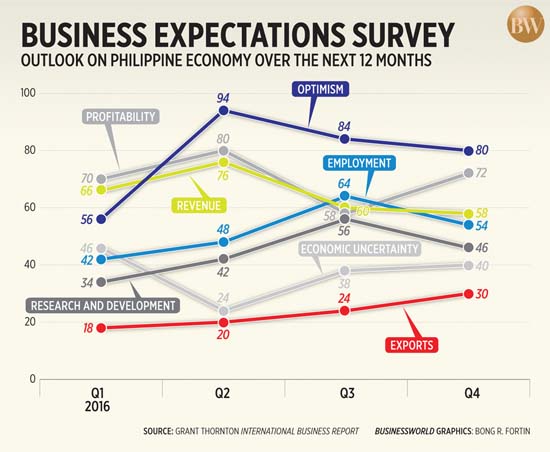