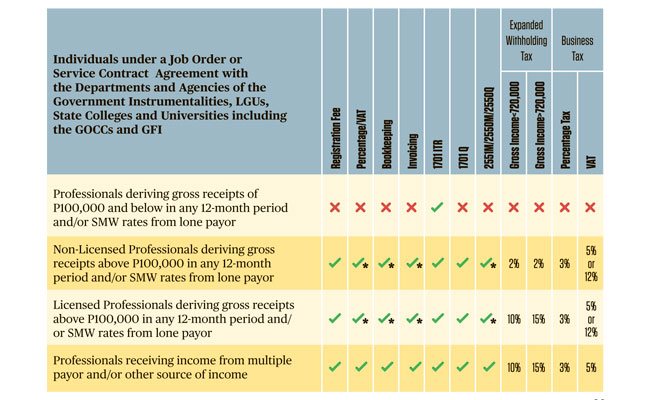 DEPARTMENTS, agencies, instrumentalities, and political subdivisions of the government, including government-owned and controlled corporations (GOCCs) and government- financed institutions (GFIs) have been hiring personnel on job-order or service contract agreement basis.

Under existing policies and guidelines of the Civil Service Commission (CSC), being hired under a “contract of service” and/or “job order” does not create employer-employee relationship between the government and the personnel. As such, services rendered will not be considered as government service.

Given this framework, BIR issued RMC No. 130-2016 to shed light on the tax treatment (appropriate withholding taxes) of remuneration/fees received by personnel under a job order or service contract agreement.

On Aug. 17, RMC No. 69-2017 was issued to supplement RMC No. 130-2016 to clarify and specify the registration and tax compliance requirements of the above-mentioned individuals.

Summarized below are the registration, filing and payment requirements applicable only to individuals under a job order or service contract agreement with the departments and agencies of the government, instrumentalities, local government units (LGUs), state colleges and universities, including GOCCs and GFIs:

(See the photo above)

* May avail of the substituted filing on Percentage Tax/VAT return and substituted official receipts.

To further guide the public, the RMC specified that these terms shall be defined as follows:

2. Licensed professional – refers to those individuals engaged in the practice of professions or callings, who render services for a fee, such as those enumerated under Section 2.57.2 (A)(1) of Revenue Regulations (RR) No. 2-98, as amended.

3. Non-licensed professional – otherwise known as non-professional, refers to those individuals who are not identified under Section 2.57.2 (A)(1) of Revenue Regulations (RR) No. 2-98 and who are not registered with and regulated by the Professional Regulations Commission, Supreme Court, Integrated Bar of the Philippines, etc., who render services of labor-only for a fee or under a contract of service.