What is to be done

FROM THE END of the World War II to the early 1970s, the Philippines was commonly reported to be in a pole position economically among the neighboring countries constituting the present Association of Southeast Asian Nations (Asean). Since then, however, we have sharply lagged behind. We are now near the bottom of the pack.

Fortunately, in recent years, the country’s economy has grown at a comparatively high rate.

As shown on the Bangko Sentral ng Pilipinas (BSP) website (statistical information in this commentary is from this source, unless otherwise indicated), the Gross Domestic Product (GDP) annual growth from 2012 to 2018 has been higher than 6%, but there was a clear deceleration from 6.9% in 2016 to 6.7% in 2017 and 6.2% in 2018. The growth went down further to 5.9% in 2019, as reported in January 2020. The growth is good, although the deceleration is worrisome.

In terms of per capita GDP, the annual growth rate is slower than the total GDP growth, because of the effect of our ever-increasing population, which is currently estimated at 108 million. GDP per capita is a measure of how our economy translates to the economic welfare of the individual Filipino and how we compare with the citizens of other countries. Our per capita GDP in 2018 of $3,095 (from the International Monetary Fund, at current prices) is low and, as such, we are still not a middle-income country. Compared with our Asean neighbors, we have a lower per capita GDP than Singapore, Brunei, Malaysia, Thailand, and Indonesia. Clearly, this comparison portrays a lamentable reversal of position of several decades ago. Our per capita GDP in 2018 surpasses only those of Laos, Vietnam, Cambodia, and Myanmar. In sum, it is not an exaggeration to say that we have lost several decades of economic development potential. This is the reason the current relatively high rate of growth must be sustained and further increased to enable us to catch up with our neighbors.

Our slower growth per capita GDP indicates the widespread poverty that persists in the country. The latest available information from the Philippine Statistics Authority shows that the poverty incidence for 2018 is 16.6%, which translates to about 17.6 million Filipinos or around 3 million families who lived below the poverty line in 2018. This statistic is computed based on a monthly income of P10,727 for a family of five. Whether this measure of poverty is a reasonable basis is, of course, debatable. However, one thing is sure. If one raises that threshold to P12,000 for a family of five (an increase of 11.8% from the official threshold), which is not unreasonable, that will include many more millions of Filipinos living in poverty.

In terms of self-rated poverty, which is regularly surveyed by Social Weather Stations, it was reported at 54% for December 2019. Whatever is the reasonable number, Filipinos numbering from 17.6 million to 58 million are living in poverty. I view any number towards the end of that range to be the number indicator that reasonably reconciles with the extent of physical poverty that we see around us — the slums in the cities and the picture of poverty in the countryside. Indeed, tens of millions of Filipinos are suffering from poverty!

When analyzing the components of our GDP (all at constant prices), as shown in BSP data, a number of things stand out that we need to be concerned about. On the supply side of the economy, agriculture has continuously lagged behind. Its growth has been really low. For the period mentioned, the growth rate never reached 3%, except in 2017 at 4%; there was even a negative growth — in 2016 of 1.2%. Although agriculture is a small chunk of the economy — only 8.1% of GDP in 2018 — it is the sector where most of our poor citizens earn their living.

On the demand side, external trade is a big worry. We have been in a trade deficit for the entire period of this analysis, except in 2012, when there was a surplus of very slightly more than zero. In 2018, the trade deficit was 10.5% of GDP. It does not require much imagination to see that, if we can overturn this chronic trade deficit by increasing our exports, we can boost our economy quite a bit.

On the demand side, the largest component of GDP is household consumption, which represents 68.5% of GDP in 2018. This proportion has not changed much over the years since 2012, when it was 70.5%. There is no doubt that much of the contribution to this portion of the pie comes from cash remittances from our Overseas Filipino Workers (OFWs) and the earnings of Filipino residents employed in activities outsourced from other countries, particularly from the United States, to Philippine shores. While these two income sources are welcome, we need to keep in mind that, with the advent and increasing development of robotics and artificial intelligence, we would gradually lose much of these income sources sooner than later, particularly from jobs outsourced to the Philippines.

Moreover, while OFW money is now very important to our economy, it carries with it a huge social cost. A recently published book, A Good Provider is One Who Leaves by Jason DeParle, which centrally focuses on Filipino migrants, narrates these social costs very well. Moreover, the fact that we ourselves cannot provide work for our own people creates a bad image for us.

In sum, a great number of our people are still living in poverty, of which a substantial proportion are homeless or living in slums. Our economic foundations are weak such that these may not be able to sustain our economic growth. We have lost several decades of economic growth potential that we need to recover to put us, at least, at par with our stronger neighbors. We, therefore, should not be lulled by the current relatively good economic growth.

What is to be done? We need to leapfrog. 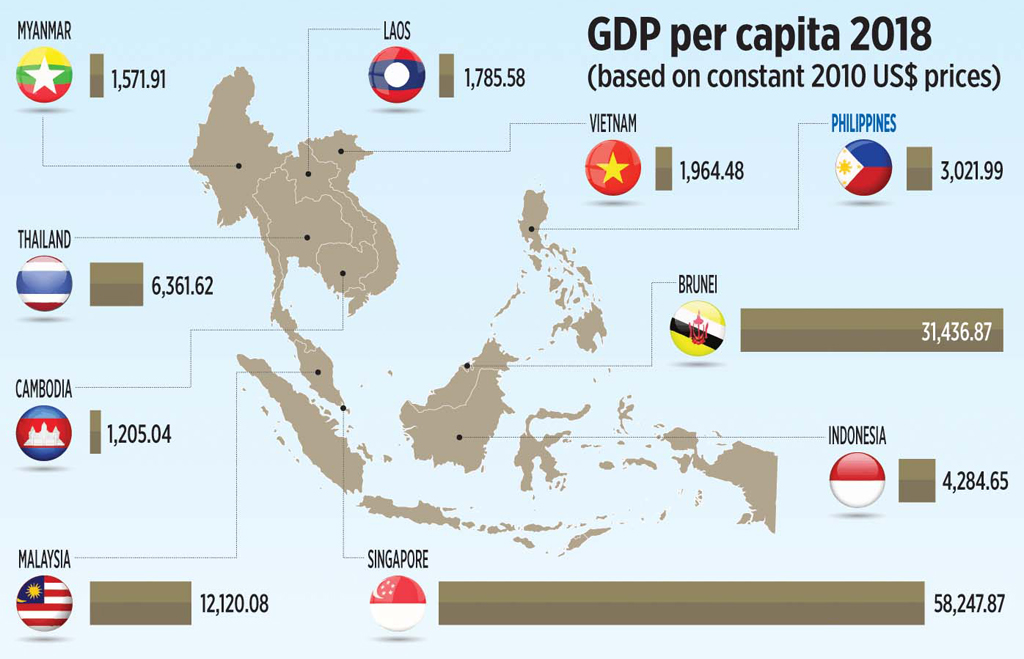 (To be continued next Friday.)

Benjamin R. Punongbayan is the founder of Punongbayan & Araullo, one of the Philippines’ leading auditing firms.

As published in BusinessWorld, dated 28 February 2020