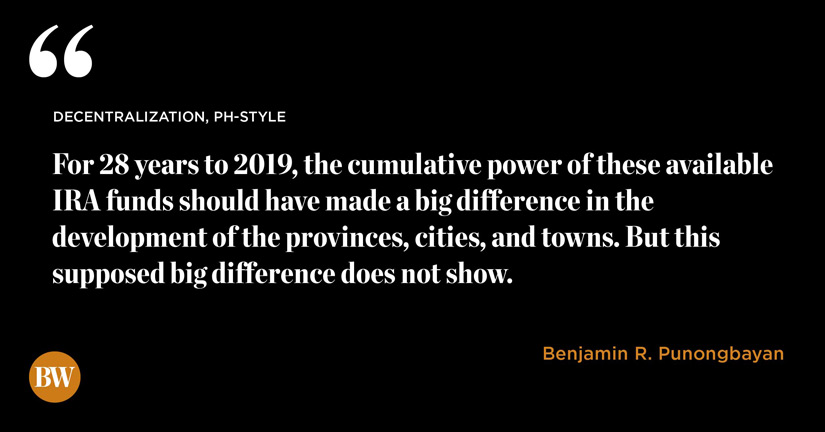 THE Local Government Code of 1991 decentralized local government units (LGUs) and, for this purpose, LGUs were given an annual allocation (allotment) of 40% of national tax collections (Internal Revenue Allotment or IRA). The IRA is in addition to the local taxes that the LGUs already impose and may impose in their respective jurisdictions. Now, after a long 28 years, this decentralization does not seem to have provided the improvements in the lives of our citizens that its proponents had argued as reason for its adoption.

The decentralization is a failure.

This failure is evident in the persistent use of the term “Imperial Manila” to describe the national government; by the LGUs’ continuing mindset of looking at the Center for additional financial assistance for their infrastructure development responsibility; and by the continuing acceptance by the Center of such requests.

The failure is also evident in the current proposal of some groups to make the existing union of the Filipino people federal. Interestingly, a principal proponent of federalism is himself the creator of the 1991 deregulation code. Whatever one makes out of this trend of thinking, it is a clear tacit recognition by the author of deregulation that it has failed.

The failure is also evident in the generally sorry state of infrastructure in Philippine provinces, cities, and towns. Uncollected garbage still abounds because of inadequate dumpsites. During the rainy season, some school children cannot go to school because the shallow and narrow rivers they cross swell and there is not even a footbridge across the river that they can use. The poor use the river as a toilet, because there are no public toilets for their use. When the school year starts, there is usually a scramble for additional classrooms which, under the Code, the LGUs could provide. But they generally don’t and look to the national government to provide them.

Why is decentralization a failure? Is it because the amount of IRA is inadequate? Offhand, probably not, judging by the prevalence of lampposts along the town roads, some of them so elaborately designed that they look grotesque; as well as by the painting of trees along the roads with a uniform combination of bright colors.

More seriously, it appears that it is not a pressing issue among LGUs. Otherwise, the adequacy of the IRA would have been a perennial big issue that would constantly hog the headlines. Of course, several years ago an LGU raised the issue of the basis of calculating the IRA and that was decided by the Supreme Court last year in favor of the LGUs. This decision requires that the basis of calculating the IRA should include customs duties and not just the national taxes collected by the BIR, as done presently. But, prior to this decision, there had been no persistent clamor to increase the IRA.

What I thought is occurring is that LGUs look at the IRA as a fund they can use for whatever they deem necessary. When it becomes short for any development needs in their jurisdiction, they leave the projects to the next higher level of government to deal with, or ask that level of government for additional funding. They are not made to see that the IRA is the only additional money that they can have to carry out all their stated responsibilities. As a result, the LGU does not have any compulsion to use its own IRA effectively and efficiently. A good example of the consequences of this mindset are the additional classrooms I mentioned earlier. Other notable examples are the development of ports, bridges, drainage, sewerage, and dumpsites that would serve local needs. LGUs tend to look at these not for them to develop and fund, but for the Center or somebody else to do.

To be fair, let us look at the quantum of the IRA. The 40% IRA is calculated based on national tax collections of three years ago. The allocation of the IRA among the LGUs is specifically provided at 23% for the provinces, 23% for the cities, 34% for the municipalities, and 20% for the barangays. These allocations are further divided among the peer units using prescribed bases.

In 2018, the total IRA was P522 billion, of which P281.3 billion (54%) was the combined IRA for municipalities and barangays. For better appreciation, let’s bring these numbers down to the region level, say, Region VI (Western Visayas). This region’s total IRA in 2018 was P41.8 billion. Bringing this down to the province level, the IRA for each province in that region ranged from P1.3 billion to P17 billion. The low end was for a small province. Let’s focus on the high end. Of the P17 billion, P3 billion was for the province itself and P14 billion was for the cities, municipalities, and barangays in that province. It is not possible to bring the numbers down to a specific municipality and barangay, as such information is not publicly available. But, based on the numbers cited, it can be discerned and it is fair to say that the separate IRA of each province, city, municipality, and barangay is not a small amount of money and may meet their respective needs, especially considering that these are amounts they are receiving every year and receiving in increasing amounts in parallel with national economic growth. Moreover, the IRA is on top of the taxes that provinces/cities/municipalities directly collect from their respective citizens. The combined amounts are certainly more than they need for operating expenses and, therefore, they have available funds for infrastructure and other capital spending.

LGUs spend their share of IRA money, which did not exist before 1991, at their own discretion. For 28 years to 2019, the cumulative power of these available funds should have made a big difference in the development of the provinces, cities, and towns. But this supposed big difference does not show. If LGUs around the country just focused on farm-to-market roads, they could have built a lot of them during the last 28 years. That, by itself, would have been a convincing exhibit of the success of decentralization. But the LGUs did not build many of those roads, because they were largely looking for somebody else to build them. So where did the money go?

I recognize that what is presented here is a top level evaluation of the outcome of decentralization. It will be more instructive if a thorough study of the effectiveness of the 1991 decentralization is undertaken. It is incumbent upon the national government to make or commission this study before it augments the IRA to implement the recent Supreme Court decision.

Decentralization is a good principle to adopt and implement as a public policy. However, it requires a good design. A good design requires a clear specification of the responsibilities of the people to whom the decentralized activities have been devolved and an inclusion of a system of accountability for the use of the money that is given.

The Local Government Code is quite expansive in its enumeration of the responsibilities of the LGUs. In infrastructure alone, the responsibilities of each province include: “provincial roads and bridges; inter-municipal waterworks, drainage and sewerage, flood control, and irrigation systems…;” For a municipality: “municipal roads and bridges; school buildings… clinics, health centers…; communal irrigation…; fish ports… drainage and sewerage and flood control…” And, for a city, its responsibilities include all those listed for the municipality and the province and a few more.

Clearly, the responsibilities of LGUs cover a wide area and LGUs are given money to carry them out. Even if only half of each of those facilities listed above had been developed for the last 28 years, we would have much better provinces, cities, and municipalities to live in today.

But there is a lot of vagueness in the enumeration of these responsibilities and that led to poor performance.

What makes the situation worse is the way the development of these infrastructure facilities is defined in terms of funding. To quote for a province: “Infrastructure facilities intended to serve the needs of the residents of the province and which are funded out of provincial funds…” The writing is the same for the city and municipality, except for substituting “city funds” and “municipality funds” in place of “provincial funds.” Who decides which funds are to be used for which project?

When we put all of these together, the whole thing becomes a game of contrived confusion. A municipality may say, that road or bridge is not my responsibility. It is the province’s responsibility. Or, it may say; yes, I am responsible for that road or bridge, but I don’t have money anymore. The same is true for the province but, this time, it looks to the national government for assistance. Then the legislators’ pork barrel, which comes from the national funds, gets into the picture. Each government unit within a province tries to get a piece of that pie.

So what happens in the end? A sorry state of widespread neglect. The needs of the citizens are not served.

The other side of the problem is the lack of accountability. The IRA is, in effect, free money given to the LGUs. This money is not raised as taxes directly from the LGUs’ own citizens, so these citizens may not be even aware of the magnitude of this money and it does not come into their consideration as the LGU officials’ accountability during election time. LGU officials should have been made clearly accountable for the LGU’s IRA by informing the citizens of each barangay, municipality, city, and province annually of the amount of its IRA, its budget, and, after the end of the year, its actual revenue, including IRA, and its actual expenditures in a form giving reasonable, pertinent, and understandable details. But they are not so required.

Decentralization was a missed great opportunity that could have improved the lives of all Filipinos. It makes one think that there are many more such missed opportunities in our society. And this is the reason we have become laggards and continue to descend in the economic chart compared to our neighbors in the world community. And also the reason why we cannot beat widespread poverty in our nation.

Most Filipinos have already been numbed by the unending failings of government. They just shrug their shoulders and say: “So what’s new?” Tough luck.

Benjamin R. Punongbayan is the founder of Punongbayan & Araullo, one of the Philippines’ leading auditing firms.

As published in BusinessWorld, dated 27 August 2019