Who's afraid of taxes?

MANILA, Philippines – Who is afraid of taxes? Not Eleanor “Lea” Roque, attorney-at-law and head of the Tax Advisory and Compliance Division at P&A Grant Thornton. Punongbayan & Araullo (P&A) is the Philippine member firm of Grant Thornton International Ltd., one of the world’s leading organizations of independent assurance, tax, and advisory firms. 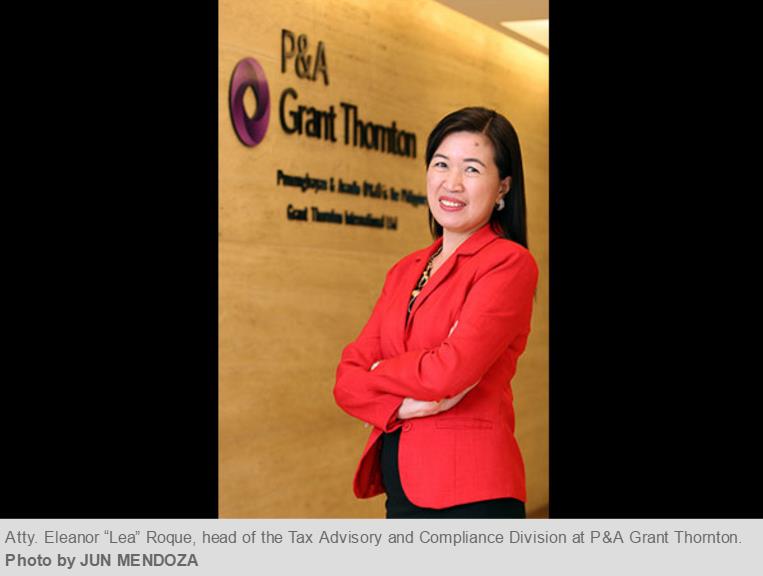 Lea has been in the tax practice for 20 years. She was posted in Grant Thornton (Vietnam) Ltd., where she was the tax director for two years, until she joined P&A in 2009.

“Many people have a negative connotation about tax, probably a fear of tax,” Lea says, “but whether you accept it or not, it’s there and it affects you.”

Benjamin Franklin is credited with the famous quote, “In this world, nothing can be said to be certain except death and taxes.”

Everybody has to pay some kind of tax, and the first quarter of the year is a busy time for filing taxes. The first thing you will think of would be the compliance requirements: renewal of business permits, barangay clearance, payment of local taxes. And then, there’s the annual filing with the BIR, for both individual and corporate tax, no later than April 15.

With the new administration, certain changes are expected with the proposed tax reform, the most prominent of which would be reforms in personal income tax, as well as corporate tax.

“Most of the proposals are positive, since it involves lowering the rate from 30 percent to 25 percent,” Lea says, “but there are also the luxury tax and excise tax, which may be raised slightly.

“The client would outsource to us the preparation of their tax returns, whether individuals or corporations. We have expat tax services as well, for expats in the Philippines. While they have to pay local taxes, sometimes they have tax equalization packages wherein a person coming from a country where taxes are low — like Singapore, where it is 17 percent — and earns his income in the Philippines, where it is taxed 32 percent, can have his employer shoulder the difference,” Lea shares.

“There is also what we call tax crediting. In the old days, to avoid double taxation, countries entered into bilateral agreements. If you are a resident of another country but pay your taxes here since you are working here, you can credit this to your tax due in your country of origin. On the other hand, if you have an income in the US and you paid your taxes there, all you have to do is to declare it here and show proof that you have paid the taxes due.”

The issue now is BEPS, or Base Erosion and Profit Shifting, which is a tax-avoidance strategy used by multinational companies in which profits are shifted from jurisdictions that have high taxes, such as the US or European countries, to jurisdictions that have low taxes, or so-called tax havens. Lea remarks, “To address this, the OECD (Organization for Economic Cooperation and Development) countries have embarked on an initiative wherein they have agreements or action plans to ensure that the correct amount is declared and paid by multinationals in the countries that they operate.”

P&A Grant Thornton’s usual clients are business corporations. “We advise them on the tax implications of their business decisions and actions.  We help them identify the opportunities and pitfalls that can significantly affect their bottom line. We provide innovative yet practical solutions to minimize their tax exposure, enabling them to maximize their potential savings and to expand their business,” Lea says. “As part of our corporate services, we can help draft articles of incorporation or give advice for mergers and acquisitions. We can also assist single proprietorships or start-ups and recommend the most tax-efficient corporate structure. We also advise clients if they qualify for tax incentives, which they may not be aware of. ”

A key problem, it seems, is that there are so many compliance requirements so that it can become quite confusing. “I think the one-size-fits-all approach is impossible,” Lea says. “It’s part of our mission to inform the public, and even the practitioners, of the evolving tax rules. Tax education is our advocacy. We hold tax clinics for clients as well as non-clients. We hold one-day seminars and give talks on specific topics or issues, such as everything you need to know about the expanded withholding tax, for example, or what to do when you are assessed by the BIR.”

The website Grantthornton.com.ph features updated and timely information. “If it’s a new issuance or if there’s something important, these are uploaded regularly,” Lea says. “There are tax alerts as well as a tax brief, which contains all the major issuances of the month.”

What are some of things one should watch out for? Changes in the withholding tax rules are important to know. Be mindful of compliance, Lea’s advises. “It’s not just the BIR that you should watch, because the interpretation of the BIR is decided by the court of tax appeals as well as the Supreme Court. So you have to understand what is the meaning of a case.  If you occupy a sensitive position, you cannot use as your defense that you did not know what your accountant was doing. You have to continually educate yourself. If you are in business, you owe it to yourself to know the tax rules. It’s our duty to pay the correct taxes. It’s the price for enjoying a civilized society.”

Lea took up journalism at the University of the Philippines in Diliman. As a young student in Bulacan, from where she hails, Lea loved to write. “I was a prolific writer,” she says. She was with the school paper. Elementary was in La Consolacion in Balagtas, while high school was at Holy Spirit in Malolos. She earned her Bachelor of Law and Master of Laws from the San Beda Graduate School. She is currently pursuing her doctorate.

Growing up watching LA Law and Ally Mc Beal on TV, she always knew she wanted to be a lawyer. “But I realized early on that I did not want to go to criminal practice or litigation. It was so emotionally taxing because you are dealing with the lives of people.”

It was a job opportunity in an accounting firm that got her well underway on her career path in taxation. “It’s the thing I have been doing for forever,” she says. “I like it because it’s continually evolving so it keeps you on your toes. I love learning something new every time. I’m a frustrated teacher.  Maybe when I retire, I’ll become a university professor.”

She paints during her free time. “Acrylic, because it’s easy to handle.” Lea paints landscapes. She took art lessons with six-year-old kids as classmates, then she discovered the instructional shows on YouTube. Painting can be therapeutic, but since she is a perfectionist, it can also be stressful, she says. No, she does not sell her paintings. She gives them away. “My mom has a lot of walls in her house where she can hang them,” she says.

As published in PhilStar, dated 6 February 2017