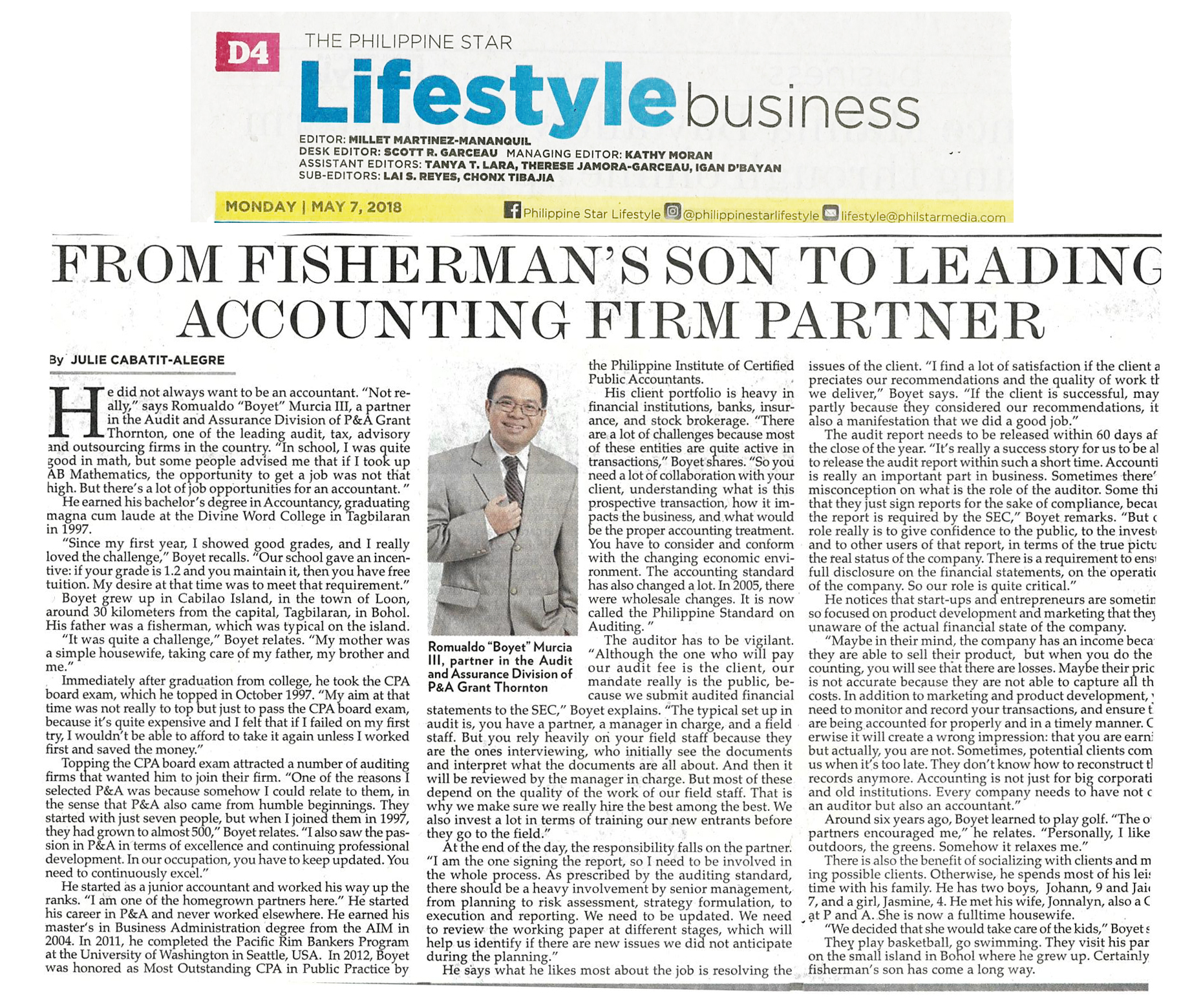 MANILA, Philippines — He did not always want to be an accountant. “Not really,” says Romualdo “Boyet” Murcia III, a partner in the Audit and Assurance Division of P&A Grant Thornton, one of the leading audit, tax, advisory and outsourcing firms in the country. “In school, I was quite good in math, but some people advised me that if I took up AB Mathematics, the opportunity to get a job was not that high. But there’s a lot of job opportunities for an accountant. ”

“Since my first year, I showed good grades, and I really loved the challenge,” Boyet recalls. “Our school gave an incentive: if your grade is 1.2 and you maintain it, then you have free tuition. My desire at that time was to meet that requirement.”

Boyet grew up in Cabilao Island, in the town of Loon, around 30 kilometers from the capital, Tagbilaran, in Bohol. His father was a fisherman, which was typical on the island.

“It was quite a challenge,” Boyet relates. “My mother was a simple housewife, taking care of my father, my brother and me.”

Immediately after graduation from college, he took the CPA board exam, which he topped in October 1997. “My aim at that time was not really to top but just to pass the CPA board exam, because it’s quite expensive and I felt that if I failed on my first try, I wouldn’t be able to afford to take it again unless I worked first and saved the money.”

Topping the CPA board exam attracted a number of auditing firms that wanted him to join their firm. “One of the reasons I selected P&A was because somehow I could relate to them, in the sense that P&A also came from humble beginnings. They started with just seven people, but when I joined them in 1997, they had grown to almost 500,” Boyet relates. “I also saw the passion in P&A in terms of excellence and continuing professional development. In our occupation, you have to keep updated. You need to continuously excel.”

He started as a junior accountant and worked his way up the ranks. “I am one of the homegrown partners here.” He started his career in P&A and never worked elsewhere. He earned his master‘s in Business Administration degree from the AIM in 2004. In 2011, he completed the Pacific Rim Bankers Program at the University of Washington in Seattle, USA.  In 2012, Boyet was honored as Most Outstanding CPA in Public Practice by the Philippine Institute of Certified Public Accountants.

His client portfolio is heavy in financial institutions, banks, insurance, and stock brokerage. “There are a lot of challenges because most of these entities are quite active in transactions,” Boyet shares. “So you need a lot of collaboration with your client, understanding what is this prospective transaction, how it impacts the business, and what would be the proper accounting treatment. You have to consider and conform with the changing economic environment. The accounting standard has also changed a lot. In 2005, there were wholesale changes. It is now called the Philippine Standard on Auditing. ”

The auditor has to be vigilant. “Although the one who will pay our audit fee is the client, our mandate really is the public, because we submit audited financial statements to the SEC,” Boyet explains. “The typical set up in audit is, you have a partner, a manager in charge, and a field staff. But you rely heavily on your field staff because they are the ones interviewing, who initially see the documents and interpret what the documents are all about. And then it will be reviewed by the manager in charge. But most of these depend on the quality of the work of our field staff. That is why we make sure we really hire the best among the best. We also invest a lot in terms of training our new entrants before they go to the field.”

At the end of the day, the responsibility falls on the partner. “I am the one signing the report, so I need to be involved in the whole process. As prescribed by the auditing standard, there should be a heavy involvement by senior management, from planning to risk assessment, strategy formulation, to  execution and reporting. We need to be updated. We need to review the working paper at different stages, which will help us identify if there are new issues we did not anticipate during the planning.”

The audit report needs to be released within 60 days after the close of the year. “It’s really a success story for us to be able to release the audit report within such a short time. Accounting is really an important part in business. Sometimes there’s a misconception on what is the role of the auditor. Some think that they just sign reports for the sake of compliance, because the report is required by the SEC,” Boyet remarks. “But our role really is to give confidence to the public, to the investors and to other users of that report, in terms of the true picture, the real status of the company. There is a requirement to ensure full disclosure on the financial statements, on the operations of the company. So our role is quite critical.”

He notices that start-ups and entrepreneurs are sometimes so focused on product development and marketing that they’re unaware of the actual financial state of the company.

“Maybe in their mind, the company has an income because they are able to sell their product,  but when you do the accounting, you will see that there are losses. Maybe their pricing is not accurate because they are not able to capture all those costs. In addition to marketing and product development, you need to monitor and record your transactions, and ensure they are being accounted for properly and in a timely manner. Otherwise it will create a wrong impression: that you are earning, but actually, you are not. Sometimes, potential clients come to us when it’s too late. They don’t know how to reconstruct their records anymore. Accounting is not just for big corporations and old institutions. Every company needs to have not only an auditor but also an accountant.”

Around six years ago, Boyet learned to play golf. “The other partners encouraged me,” he relates. “Personally, I like the outdoors, the greens. Somehow it relaxes me.”

There is also the benefit of socializing with clients and meeting possible clients. Otherwise, he spends most of his leisure time with his family. He has two boys,  Johann, 9 and Jaiden, 7, and a girl, Jasmine, 4. He met his wife, Jonnalyn, also a CPA, at P and A. She is now a fulltime housewife.

“We decided that she would take care of the kids,” Boyet says.

They play basketball, go swimming. They visit his parents on the small island in Bohol where he grew up. Certainly, the fisherman’s son has come a long way.

As published in Philippine Star, dated 07 May 2018