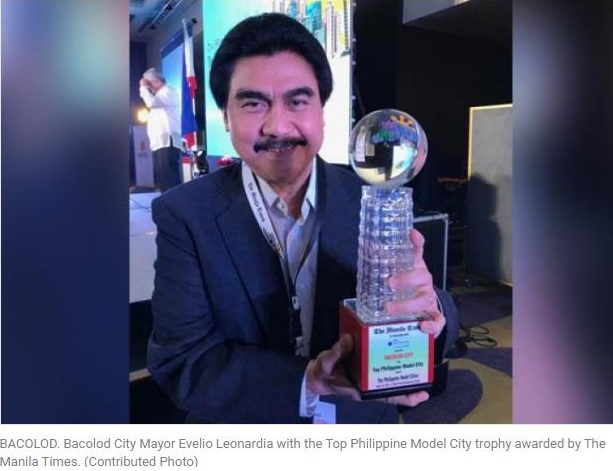 “This award validates what Bacolod is now. This will inspire us more to cultivate a culture of excellence, not just for contests like this, but for our values as a people with a high sense of responsibility,” Bacolod Mayor Evelio Leonardia, who led city officials in receiving the recognition Thursday, May 11, said.

The Manila Times, one of the most respected broadsheets and the country's oldest newspaper at 119 years old, included Bacolod in a shortlist of 13 cities chosen from among 37 select cities.

“Bacolod City is indeed not just ‘back on track but back on top,’” Gasataya, for his part, said, adding that they will continue with their cooperation to address the concerns of the city that need immediate solution.

“The award proves that Bacolod is one of the fastest growing cities in the country. Indeed, Bacolod is back on track,” Familiaran said.

These cities also received special awards based on several social indicators in the criteria, including Peace and Security, Rest and Recreation, Research and Development, Health and Education, Clean and Green, Road and Home, Livelihood and Employment, Youth and Elders, Tax and Services, and Emergency/Disaster Preparedness.

Bacolod was the only Visayan city in the 13 finalists.

Earlier this year, The Conyo Times also ranked Bacolod as the No. 1 among 10 leading cities in the country in its “The Best Cities to Live in the Philippines” list.

In 2008, MoneySense magazine chose Bacolod as the "Best Place to live in the Philippines."

In 2012, popular blog ikwaderno.wordpress.com named Bacolod as the "Most Livable Philippine City." (NLG)