This Tax Alert is issued to inform all concerned of the salient provisions of the proposed “Tax Amnesty Act” as approved by the bicameral conference committee.

Three types of tax amnesties are being offered which cover taxes due in 2017 and all prior years.  The general tax amnesty applies to all national internal revenue taxes including those payable to the Bureau of Customs (BOC), which have remained unpaid, including those covered by tax assessments which have not become final and executory.  The estate tax amnesty covers the estate of decedents who died on or before December 31, 2017, including estate or donor’s taxes arising from transfers of the estate from all previous decedents or donors to the latest heirs or beneficiaries.  The tax amnesty on delinquencies applies to taxes due under assessments which have become final and executory, criminal cases filed in court, and unremitted withholding taxes.

Upon payment of the amnesty tax and submission of the required documents, the taxpayer is granted immunity from the payment of taxes and penalties, as well as from related civil, criminal and administrative cases and penalties arising from the failure to pay any tax covered by the amnesty.  The corresponding books of account and records cannot be examined by the BIR except to verify claims for tax refund, tax incentives or tax exemptions.

We summarize below the features of the proposed Tax Amnesty Act. 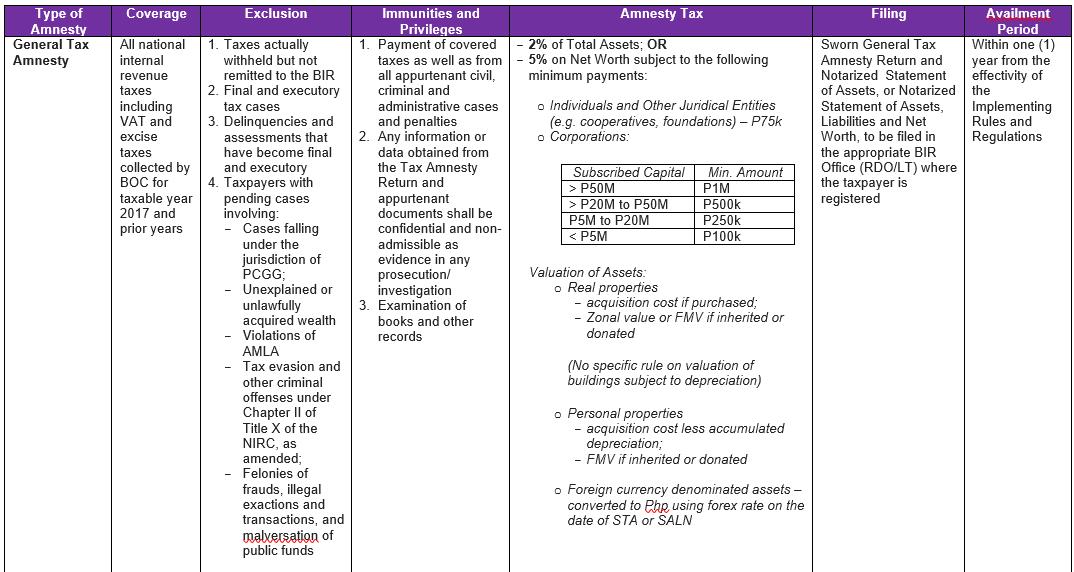