ATRIGs required before the release of imported automobiles from Customs

This Tax Alert is issued to remind those concerned that released imported automobiles from customs must have Authority to Release Imported Goods (ATRIGs).

All imported automobiles released from customs custody after March 31, 2016 without required Authority to Release Imported Goods (ATRIGs) may be detained, and if warranted, shall be subject to seizure.

In the transition, those that were released without securing ATRIGs may still apply until March 31, 2016 with the Excise LT Regulatory Division (ELTRD) and pay any unpaid excise tax and VAT, subject to 50% surcharge and 20% interest for late payment.

An ATRIG is an authority issued by the BIR, addressed to the Commissioner of Customs, allowing the release of imported goods from customs custody upon payment of applicable taxes, or proof of exemption from payment thereof, whichever is applicable.

Excisable items released without the requisite ATRIG presupposes that taxes due were not paid or not properly paid. Such items may be detained by any Revenue Officer, and if warranted, subsequently forfeited. Responsible person for such unlawful possession or removal shall be held liable for the penalties under the law. 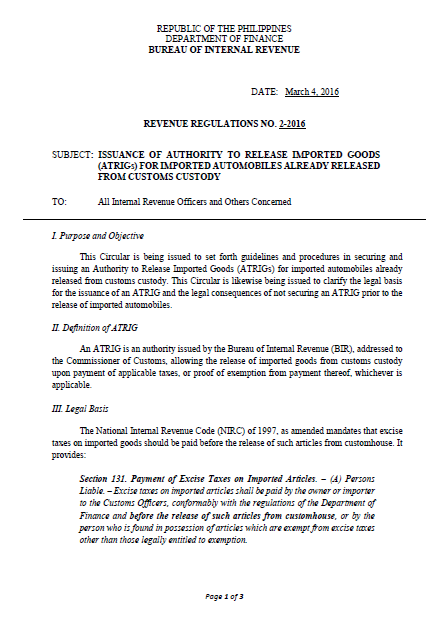