Compromise penalties for non-submission of SLSPs, alphalists and other violations (RMC No. 7-2015, March 23, 2015)

The following major changes were introduced in the revised schedule of compromise penalties :

1. P1,000 per failure to submit per return or per information, up to P25,000 per year for each category. One information per buyer/seller is one offense.

2. The following are considered willful failure (fraud), and cannot be compromised:

a. Two non-submissions in a taxable year for SLSP/Is
b. Non-submission in two consecutive years for the alphalists
c. Not in the required format

3. Subsequent offenses (second or third) not subject to compromise for violations relating to:

4. For several violations (e.g, unlawful possession of cigarette paper in bobbins or rolls, cigarette tipping paper or cigarette filter tips; unlawful use of denatured alcohol, etc.), in addition to the compromise penalties, the RMO also provided for forfeiture of unlawful articles/ items.

5. Increasing the minimum amount of compromise penalty from P200 to P1,000;

This order directed revenue officers to apply the penalties uniformly. However, a higher amount can be accepted. A compromise offer lower than prescribed may be accepted after approval of the Commissioner of Internal Revenue or the concerned Deputy Commissioner/Assistant Commissioner/Regional Director.

This order shall take effect immediately. 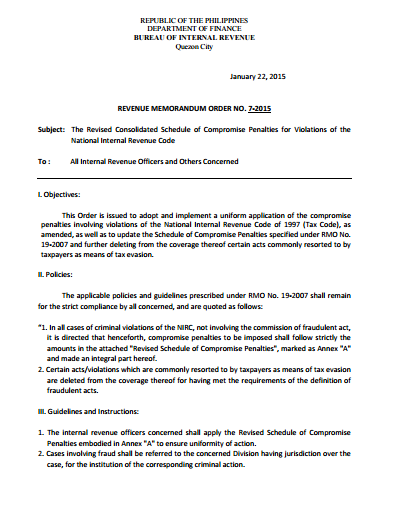