This Accounting Alert is issued to circulate the new circular by the Securities and Exchange Commission (SEC) on the amendments to the implementing rules and regulations of the Invesment Company Act, as amended, under SEC Memorandum Circular (MC) No. 33-2020.

The SEC amended the implementing rules and regulation of the Investment issued on December 19, 2017 to align with global standards and practice in order to develop the Philippine capital markets and help prepare investment companies qualify and compete in international cross-border transactions. The amendments below were also issued to update for relevance, clarity, and ease of use by regulated entities, and on account of some procedural matters to ensure adequate protection to shareholders and unitholders.

The following rules are hereby amended and promulgated:

Minimum requirements for incorporation with the SEC (Rule 3.4) - An additional affidavit stating that the track record of the fund manager is of at least five years is now required when the investment company is one or part of a group of investment companies.

Qualification of a Fund Manager (Rule 5.1.1) - The minimum paid-up capital of a fund manager of an investment company is now required to be unimpaired at all times and required to have additional unimpaired capital requirement of 0.02% of the excess of P100,000,000,000 of the total asset under management (AUM), which additional capital infusion shall be made within 30 days after the end of the fiscal year of AUM increase. The amount of addition capital requirement is capped at P1,000,000,000.

Responsibilities of a Fund Manager (Rule 5.1.2) - The MC provided additional provisions on funds that cannot be deposited by the fund manager with an independent custodian which includes the following:

b. Investment in other foreign/domestic collective investment schemes provided that the custodian and transfer agent (if applicable) of the Collective Investment Scheme (CIS) is approved by local regulations or registered/authorized/approved, as the case may be, by a regulatory authority that is an ordinary or associate member of the International Organization of Securities Commissions (IOSCO)

d. Such other assets as may be allowed by the SEC.

Independent Custodian (Rule 5.3.2) - To be considered as independent, the MC provided a threshold of 10% to custodian for owning directly or indirectly number of issued shares in either the investment company and fund manager or vice versa.

Independent Oversight Entity (IOE) (Rule 5.9) - To perform oversight over the fund manager, amendment on rule 5.9 of the MC discusses the requirement to have an Independent Oversight Entity (IOE) which shall function as an impartial committee or entity tasked to monitor the transactions and functions carried out by the fund manager. The rule also discusses the requirement of consititution and engagement of an IOE, and its roles and responsibilities.

Liquidity requirements (Rule 6.10) - The investment company may implement a decreased investment of less than ten 10% of its assets in liquid/semi-liquid assets, provided, however, that it shall submit a notarized liquidity contingency plan, signed by the president of the fund and its fund manager.

Daily computation and publication of the NAVps/NAVpu (Rule 8.2) - Aside from the publication in atleast two national paper of general circulation, the amendments on Rule 8.2 provided option to publish the net asset value per share/unit of the investment company though its website or industry association, through digital portals such as its website or social media accounts; or post them daily in a conspicuous place at the principal office of the investment company as well as its brnaches or correspondent offices which are designated redemption centers.

Separate booking and recording of shares and units (Rule 11.3) - Under rule 11.3, an investment company offering units of participation may make periodic distribution of income to investors of the fund on a pro-rata basis; provided, that the distribution of income shall be made only from cash received from interest income and/or cash dividends earned after deduction of applicable taxes and expenses. Investment companies issuing units of participation shall also be exempt from SEC MC No.11, series of 2008 or any amendment thereto.

A few other provisions were amended, including revised definitions, classification of investment companies, responsibilities of a custodian, dissemination of prospectus and offering materials, among others. Please refer to the attached memorandum circular for the complete details 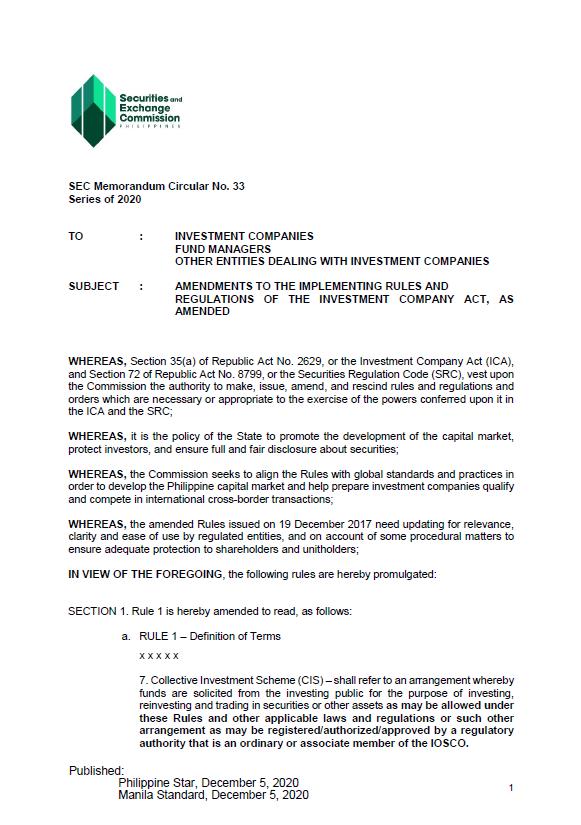