This Accounting Alert provides reminders to all entities registered with the Securities and Exchange Commission (SEC or the Commission) in relation to the filing of their 2016 Annual Financial Statements (AFS) and General Information Sheet (GIS).

On February 10, 2017, the Commission, pursuant to its authority under the Corporation Code of the Philippines and Securities Regulation Code, adopted the following measures in the filing of the AFS of the companies whose fiscal year ended on December 31, 2016 and their GIS:

Filing of AFS of Companies Whose Fiscal Year Ends on December 31, 2016

1.   All corporations including branch offices, representative offices, regional headquarters and regional operating headquarters of foreign corporations shall, depending on the last numerical digit of their SEC registration or license number, be governed by the following schedule in the filing period for 2017:

2.  The above filing schedule shall not apply to the following corporations:

(a) Those whose fiscal year ends on a date other than December 31, 2016. These entities shall file their AFS within 120 calendar days from the end of their fiscal year;

(b) Those whose securities are listed on the Philippine Stock Exchange (PSE) and those whose securities are registered but not listed in PSE and public companies. These entities shall continue to observe the due date of filing of their AFS (within 105 calendar days after the end of fiscal year) as attachment to their Annual Reports (SEC Form 17-A), in accordance with the implementing Rules and Regulations of the Securities Regulation Code;

(c) Those whose AFS are being audited by the Commission on Audit (COA) provided that the following documents are attached to their AFS:

(i)  An Affidavit signed by the President and the Treasurer (or Chief Finance Officer, where applicable) attesting to the fact that the supporting documents and that the audit of COA has just been concluded; and,

(ii)  A letter from COA confirming the information provided in the above Affidavit.

3.  Prior to April 17, 2017, all corporations may file their AFS regardless of the last numerical digit of their registration or license number;

4.  Late filings shall be accepted starting May 22, 2017 and shall be subject to the prescribed penalties which shall be computed from the date of the last day of the required filing schedule;

6.  The basic components as prescribed under SRC Rule 68, as amended, shall be submitted by filers.  Failure to comply with any of the formal requirements under said Rule including the prescribed qualifications for independent auditors and/or any material deficiency or misstatement that may be found upon evaluation of the specific contents thereof, shall be considered a sufficient ground for the imposition of penalties by SEC. The acceptance and receipt by the Commission of the financial statements shall be without prejudice to such penalties.

All corporations shall file their GIS within 30 calendar days from:

(a) Stock Corporations - date of annual stockholders' meeting per By-Laws;

(b) Non-Stock Corporations - date of annual members' meeting per By-Laws; or,

(c) Foreign Corporations - anniversary date of the issuance of the SEC License.

All corporations may directly file their AFS and GIS at the Commission’s Head Office in PICC Building and all SEC Satellite Offices (Ali Mall-Cubao Quezon City, SM Manila, SM North Edsa, Robinson's Galleria and Muntinlupa City Hall) and Extension Offices (Cebu, Iloilo and Davao). All filers of AFS and GIS, regardless of the number of reports to be filed with the SEC, complying with the circularized SEC-issued number coding schedule (for AFS only) may choose to avail of any of the following options -- SEC Express Nationwide Submission (SENS), any courier/regular mail or SEC Express Online Submission.

See attached document for the details of this SEC Memorandum Circular. 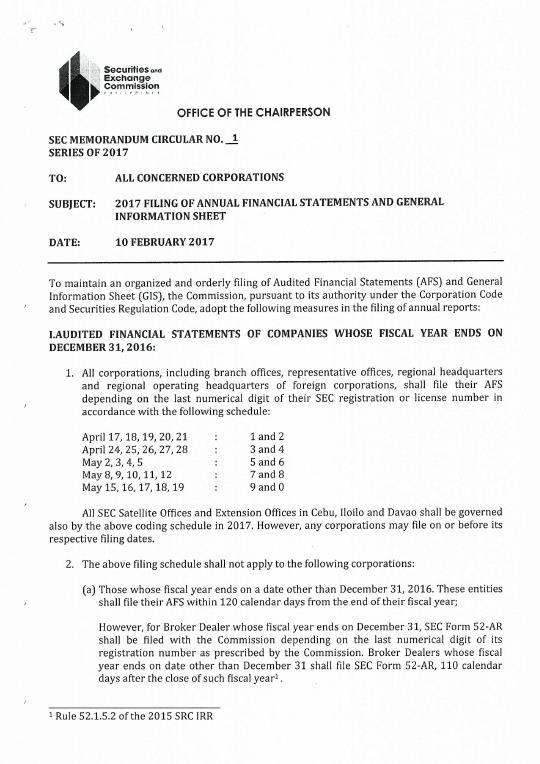