This Accounting Alert is issued to provide additional information about the recently released summary of clarifications (through a question and answer [Q&A] format) on Board of Accountancy (BOA) Resolution No. 3-2016 dated January 19, 2016. The Q&A clarifies, among others, the following:

The applicability of the rules with respect to reporting periods is as follows:

Deadline for BOA accreditation for employed or contracted CPAs performing the compilation services is not later than February 29, 2016. Completion of the Continuing Professional Development (CPD) requirements can be done not later than June 30, 2016 after signing an affidavit of undertaking to that effect.

Accreditation applications can be done through authorized representatives.

The new rules do not apply to regulatory reports submitted to government offices and other regulatory agencies, other than those submitted to the Philippine Securities and Exchange Commission and the Bureau of Internal Revenue.

See attached document for the copies of the BOA press release and the summary of the complete Q&A.

Questions about this communication should be referred to Mabel Comedia or Jerald Sanchez. 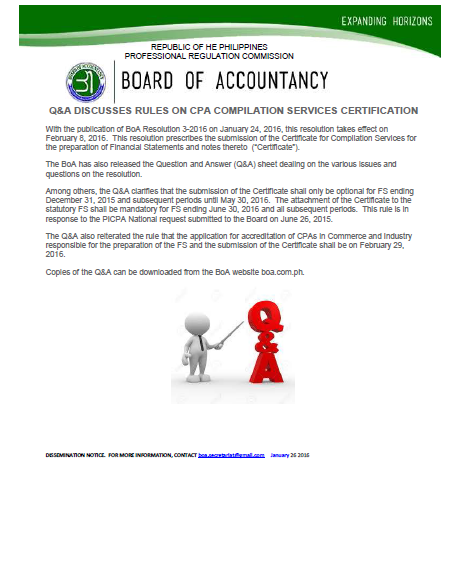