On January 13, 2016, the IASB released IFRS 16, Leases, completing its long-running project on lease accounting.  IFRS 16 will require lessees to account for leases ‘on-balance sheet’ by recognizing a ‘right to use’ asset and a lease liability.

The Standard is effective for periods on or after January 1, 2019, with early application permitted in certain circumstances.

Bringng all leases on-balance sheet is controversial. The IASB has therefore made compromises to  reduce the controversy, in particular, exemptions for short-term and low value asset leases. As a result, businesses that lease only assets such as printers and laptops will face only a limited impact. For businesses that lease 'big-ticket' assets, such as property and high-value equipment, this will however be a major change. Whatever your views on the new Standard, businesses would be well-advised to start an impact analysis sooner rather than later.

See attached Accounting Alert for the details of this development.

Questions about this communication should be referred to Mabel Comedia or Jerald Sanchez. 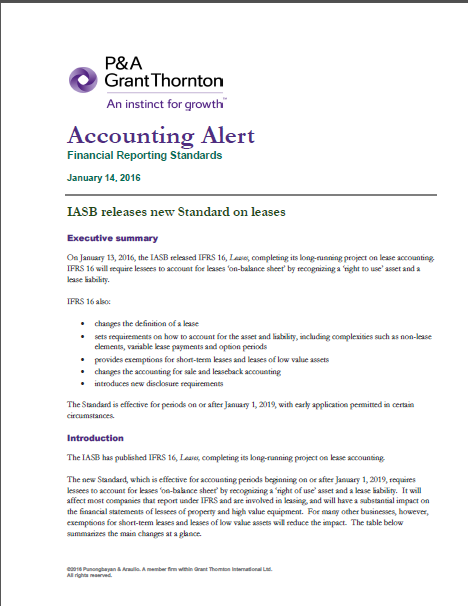