Recently, new requirements and proposed regulations affecting financial statements (FS) for the year ended December 31, 2005 of companies have been released.  Among them are the following:

c.    SEC Memorandum Circular No. 1, Series of 2006, Guidelines on the Filing of Functional Currency FS, and

d.    Proposed BIR Revenue Regulations on the use of functional currency other than the Philippine peso in FS to accompany income tax return (ITR).

The above releases would require management of companies that are affected to make certain decisions that will impact their financial reporting in 2005 and, to a certain extent, their tax reporting, as well.  P&A has prepared an Accounting Alert (2006-01:January 12, 2006) to provide a summary of the more important provisions of these releases and, with respect to some areas, to emphasize certain issues that management would have to address.

For the complete copy of this Accounting Alert, please refer to attached file. 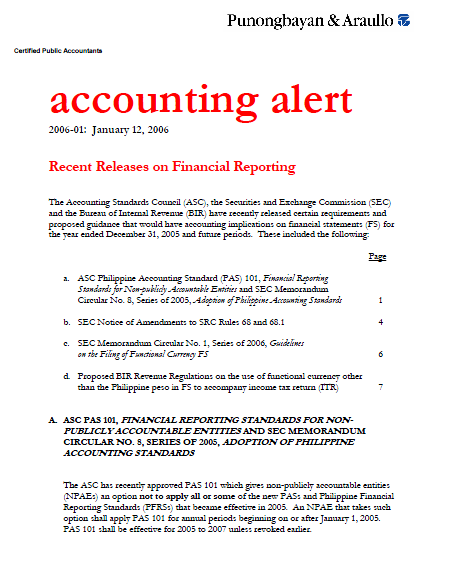